Here is an entire article of all kinds of capsicum pakora I tried:)

When it comes to milagai bajji, I tasted my very first (long back) when we visited Kuttallam along with my Tuticorin aachi and family. Thatha (grandpa) fondly bought us this spiciest bajji while all were hungry after taking bath in the waterfalls. At that time I could eat the fried batter in the outside leaving behind the capsicum, as I thought it would be spicy.Though everybody told me it won't be spicy, I didn't believe:) I started following this trick till I grew up until I found that this capsicum is nothing but a pepper with spicy smell only. Then it became my most favorite bajji. Another place I used to see this bajji was in the annual exhibition in our Tirunelveli Town. The mirichi pakora vendors would tie those garlands of non-spicy capsicums around their stall. The flavor of these bajjis and Delhi appalam would drag the crowd. Exhibitions were the only mass-entertainment there at that time ,other than cinema theaters:). The lights, circus, rides, exhibits, the shopping (YES) and the north Indian foods that were rare at that time for us would make the entire population of Tirunelveli and surrounding villages to long for that fair. When hubby took me to this fair , there he learned that I am not a fan of those challenging rides.....except my favorite merry go round / carousel:) On seeing my enthusiasm for carnivals, he started taking me to all the fairs around. Here also, the carnivals in USA shows us more entertainments and delicious foods like funnel cake, pizza. But the common thing I see in Tirunelveli exhibitions and USA carnivals is the happiness that catches up all the people of all ages, once they enter the fair grounds.  So whenever I want to add some more happiness in our weekends, I will make some foods with glad memories. No wonder these capsicum bajjis ranks high in our home:) Enjoy this mirchi pakora with your family and tell me how you like it:) 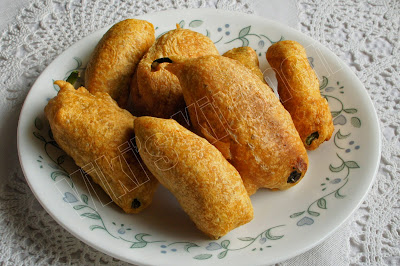 
Method:
Rinse the peppers. Slit open and remove all the seeds. We can slice it in lengthwise into two or three pieces too. Apply some tomato sauce inside the jalapeno (if using jalapeno only) to reduce the heat of pepper.
While using bajji-milagai (non spicy peppers), there is no need to slice them. But simply slit and use it whole. ..(see pictures below)
For bell peppers, I slice them in rounds...(see pictures below)

Grind the garlic and ajwain to a fine paste with 1 tsp water. Mix all the above (except oil) along with 1/4 cup water to a thick batter. Add more water if needed, but keep the batter like thick idly batter ,otherwise the bajjis will absorb more oil.

Heat oil in a wok. Before it gets smoky hot, reduce flame and keep in medium flame.

Dip the pepper slices in the batter and put it on the hot oil.  Do not clutter. Flip and fry both sides. Drain oil and take out.


Serving suggestions:
Serve hot as snack along with hot coffee or tea during rainy / winter season.
Tomato ketchup is a good side dish

Other forms of milagai bajji I tried:


Note:
*It is always a good idea to make onion bajji or some other bajji along with capsicum bajji , for guests, as everyone can't taste the spiciest bajjis.
*Using Jalapeno in bajji is my favorite part only. For non spicy versions, go for bell peppers.
*The bajji milagai (peppers used for making bajji) are usually yellowish green in color. Longer than jalapeno and softer too. They won't have any spicy taste , but smells like green chilly. I have never seen them in USA and I don't know the exact English name for that pepper too. But google may help you to see how it looks:)