Dry ginger (sukku in Tamil)in Kulambu can be very new to many, but it has a lot of curative properties in digestive ailements.We can call this as a native Indian kulambu.Dried ginger is one of the best ingredients that can be included in our cooking for the sake of our family's health.
It is also used as a medicine for people suffering from low body temperatures (chilling in hand and feet), body pain, laziness, common cold (not fever) etc.
Basically people add brinjal or boiled egg or fish to this gravy.
But I am presenting the basic sukku kulambu.
My mom used to make this kulambu atleast once in a month during rainy season and I love it very much while my brothers keep a long face:). This is her recipe and may be passed on from many generations back. 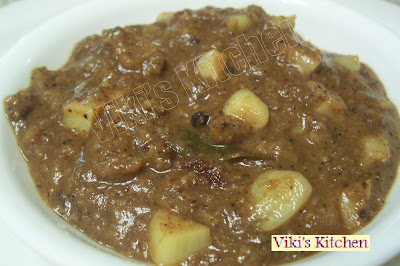 Method:
1.Heat a wok without oil.Dry roast the given items till the curry leaf becomes crispy. Cool them.
Grind them along with soaked dry ginger and coconut into a fine paste with little water.

2.chop the skinned onion and garlic . keep them separately.
Extract juice from tamarind.

3.Heat oil in a wok.
Add the curry leaves and pepper. Pepper may crack, so carefully stand a few steps back:). After the curry leaf becomes crispy, add the onion , asafoetida and saute till the onion turns red.

4.Then add the garlic and saute for a while. Then add the tamarind extract, Turmeric powder, salt .

5.After the raw smell of tamarind goes , add the masala paste and cook covered in very low flame.
(In this stage , we can add brinjal / fish / egg. But I have made a plain sukku kulambu).

6.After the gravy becomes thick and oil starts showing up in the edges, put off the flame.
Sukku kulambu is ready!

Serving suggestions:
The kulambu will have a very mild bitter taste in the end, but that will change after one hour of settling time.
The above said quantity yielded me 16 oz/ 450 ml / 2 cup of kulambu approximately.
Good to go with plain cooked rice or chapathi / dosa / idly.
We can make some extra quantity and can be safely refrigerated for 1 week.
I love it with chapathi:)
Posted by Vikis Kitchen at 6:29:00 AM

New recipe for me. Don't have dry ginger but have US style dry ginger pd. Looks so good, thanks for the recipe! :)

I made and posted your Turkey curry with Eggs added at FH. Didn't have Turkey but gravy was delicious. Thanks for that too, it was yum.

Thank you Asha for the quick comment. Thanks for trying my Turkey masala. I feel honored. Thanks for those lovely words.

Wow..this is a new recipe for me too ..Love the sukku flavor.this must be tasting heavenly :)

I have never had this curry, looks so good, i would love to have a taste.

Hey vicky,
thanx for visiting my blog.
Will definitely follow yours:)
This curry is someting new to me. never tried sukku curry.

Curry looks yum Viki...new to me and sounds interesting...Thanks for sharing.

Sukku kuzhambu I ve heard it a lot, I will definetly try this one soon! Looks excellent!

My mom used to do this often when we were kid, its such a healthy dish..lookz amazing..am damn sure tat they must be tasted divine na!!

have heard about but tried it out....thank u for sharing..will try this soon...it looks yummy and spicy

The curry looks delicious...love the flavor of dry ginger...mom uses it sometimes.

new to me..looks good...i never heard of this..thanks for the recipe..

i do have some dry ginger which i use only for making "chukku kaapi"..now i can use them for this. Thanks for the recipe!

A totally new recipe for me..Looks like it'd be best with some hot white rice..:)

New recipe for me..looks so good, i would love to have a taste it.Thanks for sharing viki:)

Completely astonished seeing your recipe Viki...never even thought of a sukku(we call it Chukku) kulambu like this..such an innovative idea viki..

This totally new to me.. picture looks really Yum-O! Will give a try. I am book marking your blog for this :)

I have never heard of this kozhambu sounds very healthy and flavorful!

looks good and very interesting :)iam a fan of ginger and its curative properties

this is totally a new recipe for me.....and healthy too i guess!!