I relate this whole stuffed brinjal with a story I read very long back in Ambulimama:) It is the story of a wise boy and the king's feast to commons.

The story is as follows:
The king who has heard about the intelligence of a local boy wants to test him. So the king asks him to tell , which food is tastier in that feast without talking with others or tasting. Within a few minutes the boy runs around and tells the king 'The tastiest one is the Ennai kathirikkai, Sir and the least wanted is So and so vegetable'.
When the king asks his secret, the boy says 'I went to the waste leaf area and no one has wasted a single ennnai kathirikkai and vice versa'.
Its a simple story and I assume that the moral is we can judge the taste of the food while disposing the leaf.(Indian feasts are generally served in fresh banana leaf).

So after reading this story , brothers and myself started craving for that unknown fry. Mom learnt the recipe from her friends and we got our most favorite fry.
Even now myself, hubby and brothers prefer it more than meat....funny thing is I never long for meat if have this ennai kathirikkai:)

Hope you too fall in love with this buttery brinjal fry. 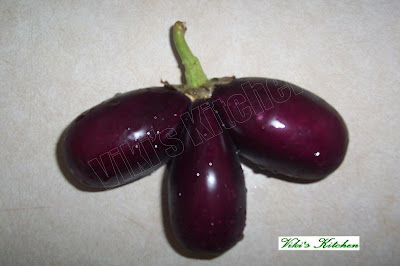 I would like to show you the picture of a rare brinjal I got from grocery stores. Never seen a triplet brinjal before:) 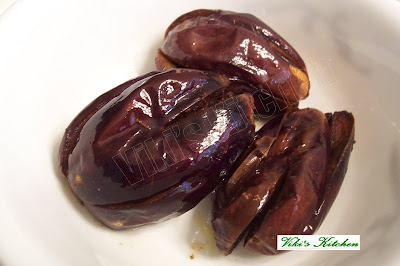 Method:
Remove the bracts of the brinjal.
Wash and clean them in running water.

Make two slits in the top and bottom, without cutting it into half.

Place the salt and powders in a small bowl.
Mix them into a smooth paste with 2 tsp water.

Carefully stuff this paste inside the brinjal. Keep aside for 10 minutes.

Heat oil in a wok.
Deep fry them, till the skin gets wrinkle and the brinjal turns tender like butter.

Note:
We can coat some oil all over and broil in the oven instead of deep frying. But We can't expect the real taste in that oven method.

Serving suggestions:
Serve as side dish with sambar and rice.
Posted by Vikis Kitchen at 1:25:00 PM

I love this too..but never tried making it..my mom used to make some powder filling and then fry the brinjal with that powder stuffed in it..should try making it sometime..

Everything looks delicious!! There is a gift waiting for you over on my blog. Peace to you, Kathy

Everything looks delicious!! There is a gift waiting for you over on my blog. Peace to you, Kathy

Thanks for posting this recipe dear..looks so good...I would definitely try this :)

chef and her kitchen said...

its so easy and so delicious as well

SUch a delicious ennai kathirikkai Viki..

Like the glossy texture of the kathiri! I also read that story when I was a kid!

Give me Eggplant anytime, slurp.

Sowmya: yes dear, Try this . You will love this very much.

Kathy: Thanks dear. I feel honored to get such an appreciation from a writer like you. I will make a post on this.

Gita: Thanks Gita. This is what I did for New year along with aviyal as side dish. I published it immediately just because you asked..I am sure you will love it.

Kitchen flavors: Thanks dear. I adore miracles like this:)

Anu, Prathiba, Sushma,Tina, Priya, Shanthi,Siddhi: Thanks for those sweet comments my friends..
Asha: Yes dear. I too love brinjal at any time , with anything:)

Nandhini: Thanks dear. When I was a kid, before knowing the facts on diet...I was addicted to this fry:)
You too read that story? Hugs dear. Very glad to know that. Even now I love kids books and comics like Rani comics, Lion and Indrajal , which we collected long before. certain things like this never bore me:)

I haven't known this recipe so far, sounds easy to do yet very delicious I'm sure;
I get these indian kutty brinjals only in Indian stores, so once in a month, when I go there, I buy them; they taste yummier than the giant ones I get in my local stores!

First time here , you have a lovely space. I'm sure i'll keep coming back for your traditional recipes.

nice story dear...yummy recipe..who can say no this yummy yummy......?

Thanks for your kind words my friends!

Me too a big fan of Ambulimama stories..Brinjal looks totally Yummy and glazed..